Past History Stories of the Gowanda Volunteer Fire Company

Stories by Phil Palen, Gowanda Historical Society and Frank Rizzo, You Know Your From Gowanda, Facebook page
​From Phil Palen:
MORGAN HOSE COMPANY
Here are members of the Gowanda Fire Department's Morgan Hose Co. #5 around 1905. They are in front of the original fire hall, then located where the village hall is today. The old hall was moved east along Mill Street and became the ambulance garage. The building next door was the Grand Central Hotel, which burned to the ground as Crowell Auto Supply in 1996.
From left are: Unknown, Wesley Hooker, Ward Blackmon, Frank Moll, unknown, Ivory Lincoln, Ralph Schaack Sr., John Christenson, possibly a Mentley, Harmon Smith, unknown, Dr. Herman Johnson (behind cart), Hugh McDonald, George Hahn, Alfred Hawkins, unknown, Max Armes, George Law, Floyd Bentley, Ward Van Deusen, and Charles B. Morgan.
Morgan and John W. Schatt owned a cutlery factory in the old building next to the bridge where the Army tank is today. In the early days of the fire department, business or factory owners would sponsor and equip various companies to protect their factories and the public at large.
The alarm bell above Mr. Morgan has a box that reads, "W. R. Smallwood Fire Alarm System."
Courtesy Gowanda Area Historical Society.

​From Phil Palen:
MEMORIAL DAY PARADE, 1960
The Gowanda Fire Department marched in the Memorial Day parade in 1960. The two boys in front are brothers Doug and Jim Parks. Notice the Hollywood Theater coming events board next to the Gowanda Loan building.
The Tot Shop, an infants and children's clothing store, is between the bank and the theater. It later became incorporated into the bank. The upper facade of the building, a former bank, was saved after the 1924 Opera House fire destroyed the west half of that block.
Wallace's 5 & 10 store is to the left of the theater. The Attic Place is there today. John Palen and Ken Peters are in the crosswalk.
Courtesy Gowanda Area Historical Society. 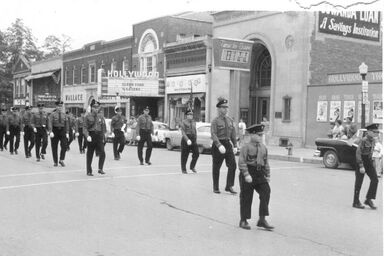 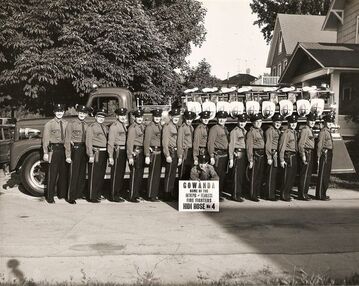 ​From Phil Palen:
FIREFIGHTERS' CONVENTION, 1914
Here is another photo taken at the firemen's convention in Gowanda in August 1914. The view is of Buffalo Street from the upper floor of the Grand Central Hotel (where the village hall parking lot is today).
The building on the right is the Plumb Block, later known as the Carpenter Block. The large dark factory was the Gowanda Plow Works, on the site of Shop 'n' Save. The building with the white awnings was the Rink Block at the northwest corner of Buffalo and Mechanic streets. Notice the overhead sign with a finger pointing to the Crawford Hotel across the bridge.
Photo courtesy Gowanda Area Historical Society. 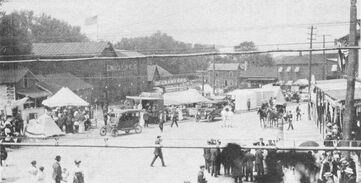 ​From Phil Palen:
1914 GOWANDA OFFICIALS
Gowanda hosted the Southwestern Association of Volunteer Firemen's convention in 1914. This photo of village officials was in a special edition of the Gowanda News on July 24, 1914.
From left to right are Police Chief James Clark, Village President Willis A. Becker and Village Trustee Burt J. Crawford. They are standing in front of Crawford's hotel, where the Olympia Restaurant is today. The hotel burned in 1927. Becker's daughter, Doris Muir, was the longtime Gowanda librarian.
Photo courtesy Gowanda Area Historical Society. 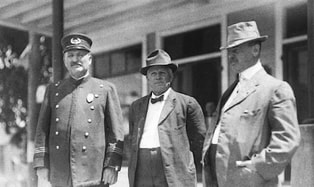 Transition Of Fire Halls Over The Years 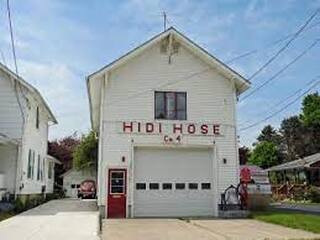 Original Fire Bells
The original fire bells to alert the volunteer firemen of a fire. One bell still located in front of the Hidi Hose #4 (Photo Above) hall on Beech Street and the other bell has been moved from the original hall, to the front of the village municipal building to now where it sits in front of the current fire station on Aldrich Street. The bell was built and dedicated in 1895